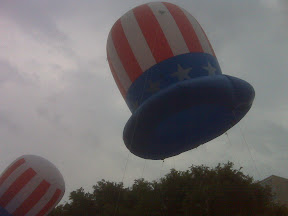 I spent my first Fourth of July in Philly (I was in Rome last year) by heading to The Parkway and The Art Museum. There was a Fourth of July Parade, which is the first parade I have ever seen in person! I finally learned what a ‘Mummer‘ is and why I should be afraid of them. I also managed to eat tons of needlessly expensive food and watch fireworks.

Honestly, I would think that the birthplace of our nation would put on a better fireworks show. I mean, it was a good show. Lot’s of “Boom Boom’s”, lasted longer than five minutes, but I think the show in my hometown of Freehold, NJ was just as good. If not better (smaller crowds.)

P.S. It is apparently no longer funny to say “Celebrate America’s freedom by blowing up a small part of it.”